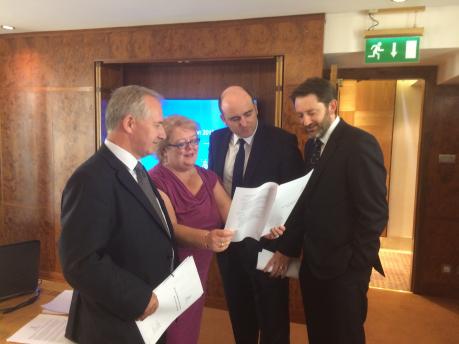 Thursday 21st September 2017.   The Irish Medical Organisation (IMO) has called for a complete revision of the budget for the health services in the coming budget to avoid a further deterioration in the public health services.   The organisation is making its pre-Budget submission today (Thursday) and briefed politicians on the urgent demands for resources across the health services.

Speaking today, Dr. Ann Hogan, President of the IMO said Doctors and medical professionals were now questioning the capacity of the traditional budgetary process to deal with the scale of the mounting challenges in the health services.

Dr. Hogan said; “we’re now seeing the cumulative impact of almost a decade of austerity in the health services, an aging population and a manpower crisis amongst doctors.  Any of these challenges would be difficult to address in isolation.  Together they are potentially devastating.”

Dr. Hogan outlined IMO priorities across a range of services.  Dr. Hogan said that a common theme across the services was a recruitment crisis which was leading to massive shortfalls in the number of doctors who should be working in the system; “we’ve a range of massive problems to deal with but unless we can address the manpower crisis, we won’t be able to fix anything at all.”

The HSE has identified an expected shortage of over 2,000 doctors by 2025 with hundreds of current GPs scheduled to retire in the coming years.  Severe cuts implemented during the financial crisis have decimated resources for General Practice leaving to many prospective GPs emigrating to countries which spend significantly more of their health budget on GP services.

The number of patients waiting more than a year for an outpatient consultant appointment has doubled since last year.  This is directly linked to the fact that Ireland has the lowest number of doctors per capita in the EU.

According to official figures, there are 1,600 fewer consultants working in the Public Health Services now than should be the case under the most recent targets (set out in the Hanley Report on Medical Staffing).   Up to 400 approved consultant posts remain unfilled or filled on a temporary basis by locum staff.  The common issues in this recruitment crisis are pay and working conditions which now lag significantly behind those available elsewhere in the English-speaking world.  Pay for non-consultant hospital doctors in Ireland is between 5% and 19% behind that offered in other English-speaking countries.  Emigration amongst qualified doctors is creating a recruitment crisis which will worsen in the years ahead.

The IMO is calling for a significant investment in workforce planning and recruitment and retention efforts, to ensure the Irish health services are fully staffed with appropriately experienced medical professionals.  The 30% unilateral pay cut imposed on new-entry consultant doctors in 2012 must be completed reversed.

Bed occupancy rates are far in excess of recommended norms to the extent that they now pose a risk to patient mortality.  People are dying in Irish hospitals because of overcrowding.

The IMO is calling for an immediate replacement of the roughly 1,500 in-patient beds which were removed from the public hospital system since 2007 with financial provision made for additional beds, pending the outcome of the Department of Health’s bed capacity review.

The IMO submission also deals with other areas including the need for investment in IT and technology and in prevention.  Full details are available in the submission which is now available on the IMO website; www.imo.ie