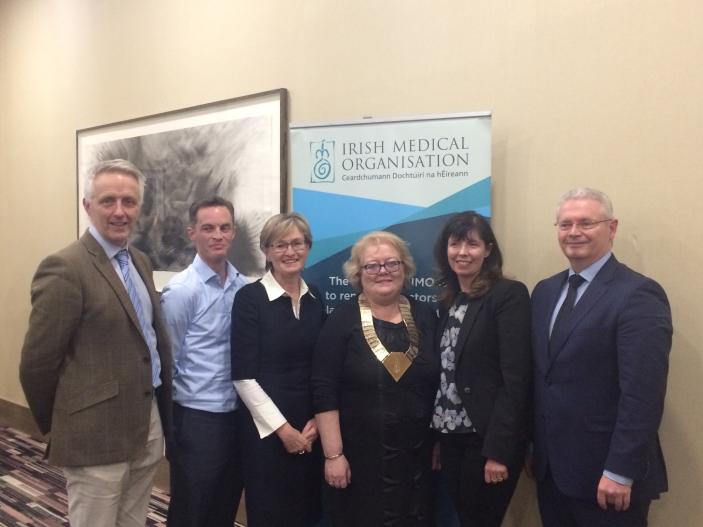 Followed by a panel discussion with guests including:

Thursday 18th January 2018.  A special seminar on the challenges posed by Brexit to health services has heard that the UK’s exit from the EU poses a number of significant challenges for healthcare collaboration between the Republic and the United Kingdom.

The Cooperation and Working Together (CAWT) partnership between health and social care services in Ireland and Northern Ireland which has facilitated a number of successful collaborative projects in healthcare in the border regions managing funding from the EU INTERREG Programme and the Special EU Programmes Body.

Many of these projects have resulted in longer-term service level agreements including agreements for the provision of GP out-of-hour services, shared dermatology clinics, ENT Services and Renal services in the border areas. New funding arrangements will be need to support future collaboration after 2020.

Other cross-border service level agreements exist as a result of collaboration and capital investment from both sides of the border including Radiation Oncology services and Emergency Cardiology Services at Altnagelvin Hospital, as well as the provision of all-island paediatric cardiac surgery services for children with congenital heart disease at Our Lady’s Children’s Hospital Crumlin, Dublin.

Many Irish graduates complete their post graduate training and/or spend a period of time in the UK before returning to Ireland. A bi-lateral agreement will be required between Ireland and the UK.

Ireland will need to become more competitive in attracting and retaining medical professionals as the NHS will have a smaller pool of countries from which to recruit from.

Speaking at the seminar, Ms. Mairead McGuinness, MEP and Vice President of the EU Parliament said; “Brexit poses significant risks to patients in Ireland and across the EU. It is positive that both Ministers for Health in Ireland and Northern Ireland (previously) have expressed their wish to extend and further develop patient access to quality services on a cross border / all-island basis. And I have met many UK officials who want collaboration on healthcare to continue. But that willingness to continue as we are, will be challenged by the reality of the UK leaving the EU and the follow on consequences.  There are risks to both formal and informal working relationships and arrangements which characterise cross border health and social care activity in Ireland and Northern Ireland. Issues like diverging regulations could lead to shortages of medicines, and confusion over recognition of qualifications could hinder the continued free movement of doctors and other medical professionals. Overall there is still considerable uncertainty over the shape of the future EU/UK relationship, which makes preparing for these challenges difficult. Now is the time to outline the challenges, inform the negotiators and put patient safety at the heart of our negotiations.”

Dr. Denis McCauley, IMO GP Committee member and Donegal Coroner said;  “There has been increased sophistication in our cross border health collaboration. It is vitally important that we remain vigilant during the Brexit negotiations and that this collaboration is not threatened.”