11th April 2022.  Dr. John Cannon, Chair of the NCHD Committee of the IMO has warned that industrial action by NCHDs was likely if there is not an “urgent and serious” engagement by the HSE to address long standing concerns about working conditions, safe hours and routine breaches of contract.

Dr. Cannon described the mood of NCHDs across the country as “demoralised, frustrated and angry”.

Dr. Cannon said the IMO NCHD Committee was launching a ballot of members to seek approval for industrial action up to and including strike action in the event that the HSE does not engage meaningfully to resolve the situation and implement much needed reform. While no doctor ever wants to go out on strike, the committee feels that to allow the current situation to continue would pose a substantial and unacceptable risk to patient safety. The Committee is therefore recommending members to vote in favour of industrial action up to and including strike action.  The Committee has launched a new campaign to rally support for reform - #standingup4NCHDs

The NCHD grade is a key pillar of the Irish hospital system. 7,500 NCHDs account for two thirds of the medical workforce in Irish hospitals providing care to patients. Despite significant changes to the demographic of the workforce and the heavy reliance on international doctors the basic structure of NCHD training has not changed for decades.

The IMO NCHD Committee has today published the findings of comprehensive surveys and research on the attitudes of NCHDs to their current working conditions. 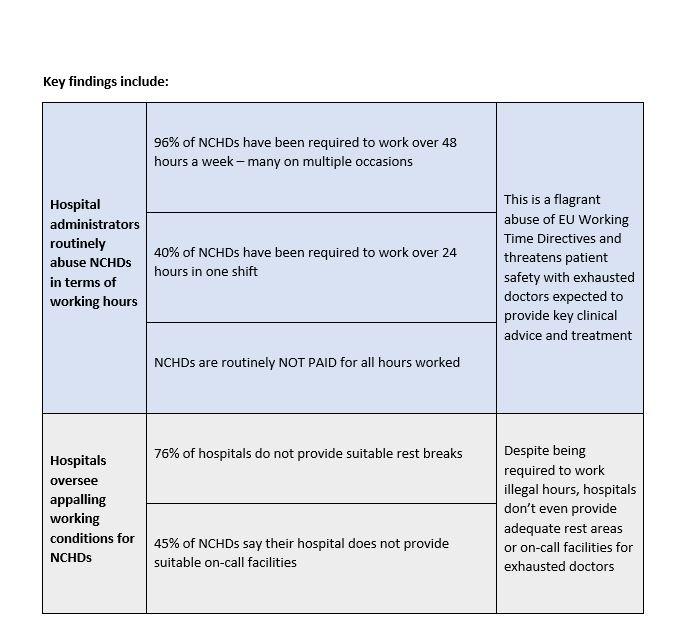 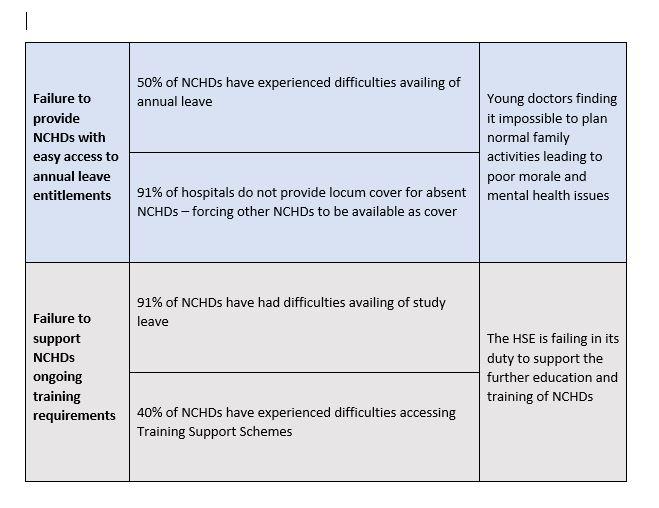 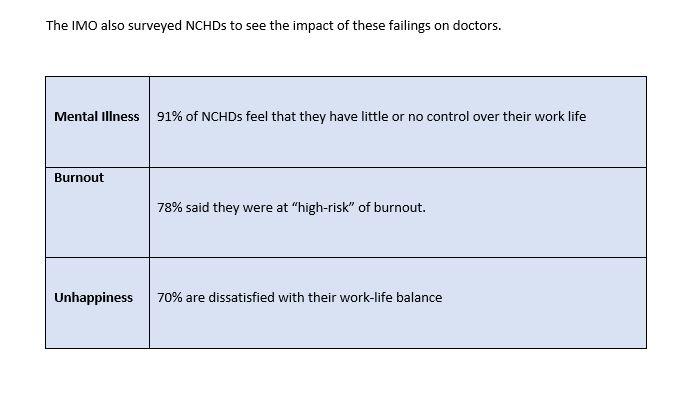 Dr Cannon said “It is clear from our research that the HSE has little concern for the physical and mental wellbeing of NCHDs. It is an incredibly short-sighted attitude as we know that these working conditions pose significant risks to patient safety.”

Dr. Cannon warned that the NCHD crisis was feeding directly into the shortage of desperately needed consultants in the Irish health services; “This is a crisis for patients and health care services.  Patients are being seen by doctors who are exhausted, stressed and under pressure.  At a time when we struggle to recruit desperately needed consultants, we are driving away the next generation who we need to fill those roles in the coming years.  Today this is a crisis for our NCHDs, but it promises an even greater crisis for the wider health service if it is not addressed urgently.”